Neeru Bajwa and Gippy Grewal starrer ‘Paani Ch Madhaani’ is certainly one of the highly awaited movies of the year. It was initially scheduled to be released on May 21, to mark the season of love. However, the makers pushed the envelope and now this love drama will be hitting the big screens on Diwali 2021 i.e.,on 4 November.

The whole cast of the movie took to their social media handle to share the new poster and announce the new release date. The picture shows Neeru Bajwa and Guppy Grewal in a different Avatar. They are looking at each other with a  smile on their faces.

Further, coming back to the movie, as aforesaid it is a love drama set in a bygone era. Written by Naresh Kathooria, and directed by Vijay Kumar Arora, the movie will feature Gippy Grewal, Neeru Bajwa, Karamjit Anmol, Harby Sangha, Honey Mattu and many more talented artists. Also, Gippy and Neeru will be seen together on the big screen almost after a decade. Though during the lockdown, the two were seen in Gippy’s song ‘Nach Nach’, this will be their first movie after almost 10 years of gap. No wonder the audience is eagerly waiting for the film to hit the theatres. 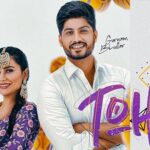