On the 10th of March, Wednesday, Punjabi music industry fans saw Sidhu Moosewala drop the poster of the most anticipated album of his. After weeks of inactivity and detachment from social media, Sidhu finally broke the silence by dropping the poster and making the grand announcement.

Through a post on his official Instagram account, Sidhu released the official poster and the teaser of his upcoming album “Moosetape”. The post had several international as well as Punjabi artists tagged in it. Fans suspect that the tagged people in the post are the artists most likely to collaborate with Sidhu in his upcoming enormous album of 25 songs. The tagged artists in the post are Sikander Kahlon, Intense music, Steel Banglez, Divine, Wazir Patar, The Kidd and Mr Morrisson. Music producer Snappy is tagged in the official teaser.

Sidhu has previously worked with a British producer of Indian descent, Steel Banglez, in the song “47”. The Kidd is often the major music producer for Sidhu Moosewala’s tracks and Snappy has too worked with Sidhu in his previous projects. It will be the first collaboration with the rest of the artists.

All the artists tagged in the post, such huge hype, grand announcement, all of this hints that this album is going to be the artist’s one of the best works and Sidhu’s fans can’t wait any longer. 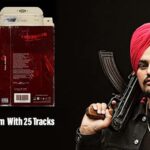