Samdish Bhatia, the main man behind Scoopwhoop’s Unscripted, recently bid farewell to the company and all its platforms along with his team. He went on to marry the love of his life and launch his own Youtube channel, Unfiltered By Samdish after his departure from ScoopWhoop. While the fans were delighted to see Samdish back to what he does best, the question surrounding why he parted ways with ScoopWhoop always remained.

Samdish has finally broken the silence on it and has revealed the reason behind the unexpected break-up. Sharing a post on official Instagram handle, Samdish wrote everything about the issue. He began with describing how he was left traumatized after leaving Scoopwhoop. His close friends helped him in the hard times to recover from the trauma.

“The place was my home for 6 years. And yet, I wasn’t even given the opportunity to say a proper goodbye”, sums up Samdish’s feelings after departing. He wrote in the note that he and his team gave in everything they had to build the place, but now, it is a goodbye to the place, the relationships and all the unfinished projects lying there in the hard disks.

Samdish revealed that the last 3 months have been really tough for him and he’s finally gathered enough strength to take back the wheel of his life, and considered it important to have a one-on-one conversation with his fans about everything. The simple reason why Samdish Bhatia left Scoopwhoop is, he was assaulted!

Though Samdish decided to not name anybody in particular, he revealed that the way the company dealt and is dealing with the situation is equally worse. “They have made a clear choice to take side with one of the senior-most people in the organization”. He elaborated that he’s sure they’ll come after him after this note, but he considered it only appropriate to share it with the audience, as they have the right to know the truth.

The incident left Samdish so devastated that he did not want to work again. He did not want to face the camera, did not want to put in any effort to get out of the feeling. Refusing to share his personal things on social media, he just wrote that his true partner stood with him at this time and took complete care of him.

This was all that Samdish had to say about his departure from Scoopwhoop, the incidents that followed, the traumatic experience he had to go through and his rise back to the game! As of now, he’s running his Youtube channel and is back to entertaining his fans with the most Unscrip..ah! Unfiltered content. 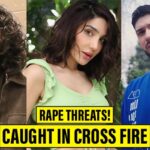