How can Punjabi movie lovers keep calm when surprising announcements about the projects are made on a constant note? Another day and yet another exciting announcement is made by the artist, Ammy Virk. We can doubtlessly say that Ammy Virk is living his life to the fullest as he has a number of films lined up which are scheduled to release this year as well as the next year, 2022, already.

Now Ammy Virk has again made the public astounded by disclosing the poster of his next coming film, De De Geda. Ammy took to his official Instagram handle to share the news and mentioned that the film, De De Geda is scheduled to release on 18th February, 2022. The artist also shared that the movie will be his first big screen project of the new year, 2022.

De De Geda will be released under Ammy Virk’s own production house, ‘Ammy Virk Production’. The poster looks quite appealing as it reflects a man playing dhol and a woman grooving to it. This upcoming film has been written by Rakesh Dhawan, who is one of the ace writers of the Punjabi industry. Further, no details about the movie have been revealed by the artist yet. Sharing the poster he mentioned, ‘Agle saal di pehli film ❤️ 18feb ❤️

Ammy Virk has a bunch of projects straightened up for the year 2022. He has ‘Sher Bagga’ and ‘Baajre Da Sitta’ with the confirmed release dates and some other projects with no confirmed announcements too. 2021 was a fruitful year for Ammy as he had some major releases like ‘Puaada’, ‘Qismat 2’ and two movies are still pending for this year to be released.

De De Geda will be released in the Valentine’s week of 2022 on the 18th February and we can’t wait to see him on the big screens in the new year too. Let us now wait for more announcements regarding this film as much of it is not known at the current time. 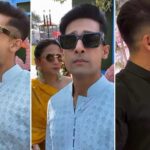