Sidhu Moosewala’s first ever track to be released after his death, SYL, immediately started shattering international records when it was released. In just a matter of 2 days it had amassed more than 25 million views on Youtube. Now, the song has made it to the Billboard.

SYL song was released on 23 June and around 5 days later, the song has ranked 81st on the Billboard Canadian Hot 100 Chart. Even after his death, Sidhu Moosewala remains Punjabi Music Industry’s undisputed representation on the prestigious Billboard Charts.

Sidhu Moosewala’s SYL talks about the Satluj-Yamuna-Link Canal which allows water-sharing between the states of Punjab and Haryana. Following its release, controversy broke down all over. The song was later removed from Youtube in India following a legal complaint by the government.

ALSO READ | Sidhu Moosewala Is 3rd Most Searched Asian On Google In 2022 Among Katrina Kaif, Virat Kohli & Others

Sidhu Moosewala was murdered on 29 May by multiple gunshots at Mansa, Punjab. The death shook the whole country and the Punjabi Community. The generation had never seen a star of Sidhu’s stature being shot down in broad daylight and it was called a ‘Black Day’ in the history of Punjab.

However, the physical death of Sidhu wasn’t able to stop the storm of his art he had left behind. His songs continue to make Punjabis proud by ranking on International Charts like the Billboard. 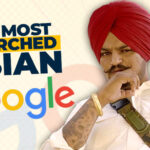